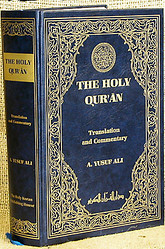 But according to this story in the USA Today, the movement to keep the Koran out of the courts isn’t limited to the Sooner state.

At least seven states, including Arizona, Florida, Louisiana, Oklahoma, South Carolina, Tennessee and Utah, have proposed similar laws. Tennessee and Louisiana have enacted versions of the law banning use of foreign law under certain circumstances. Former U.S. speaker Newt Gingrich would like to see Congress adopt a similar for the federal courts.

Supporters of sharia bans, including Frank Gaffney, president of the Center for Security Policy, say Islamic law is creeping into U.S. courts. He worries about jihadists trying to establish sharia courts to weaken democracies around the world. “I think you’re seeing people coalesce around legislation of the kind that was passed in Oklahoma,” Gaffney says.

But Muneer Awad, the chair of the Oklahoma chapter of CAIR, the Council of American-Islamic Relations, says the Oklahoma law, if upheld, could have real-world effects on Islamic citizens. It could prohibit a judge from probating his will, written in compliance with Islamic principles, or adjudicating other domestic matters, like divorces.

Still, Americans have no reason to fear sharia law in America, says Barry Lynn, executive director of Americans United for Separation of Church and State, which advocates for religious freedom.

However, Lynn says he expects to see more attempts to ban sharia law regardless of the outcome in Oklahoma.

If the muslims can't live under the laws of The United Sates of America...then they should go back where they are more "comfortable".

As it should.  Hope they apply the same to international law as well.

We have our own Laws here and they chose to move here under those Laws, If they do not like them they can go back to whatever Litter Box they crawled out of. America WAS founded on Judeo-Christian Laws and beliefs, so when they move here they are to respect them. If by some chance someone decides to convert to the so-called religion of the heathen they were living under our Laws before their transformation.

Thank God for brave men like Frank Gaffney who stands up to the Jihadis!  I really would like a Muslim who does not want to assimilate to our way of life and government, to answer the question of why they came here to live.  America, love it or leave it!

We all know why they came here.... it's written in their Koran... to take over the world. How easy it would be to conquer the world if they can conquer America!

...But Muneer Awad, the chair of the Oklahoma chapter of CAIR, the Council of American-Islamic Relations, says the Oklahoma law, if upheld, could have real-world effects on Islamic citizens...

Who cares? Do Muslims care about civilized laws of the country? Do they care about Christians? Or do they care about women when they use them as the slaves? So why we should care about their feelings? They always can move to any Muslim country. I do not think that anybody would persuade them to stay.

Right. I want this law/ban in Indiana.

Write your State Congressmen.  While you are asking them to pass laws prohibiting Shaira Law as part of your country law books, ask them also to tighten up their Election Laws.  Even though they have a requirement on the books that Presidential Candidates must be nominated as qualified IAW the Constitutioinal requirement, they accepted the lie posted by Nasty Nancy Pelosi as a Private Citizen.  If she caused you a problem, sue her personally.  You have that right.  Indiana will not respond to any request to see what Nasty Nancy filed with Indiana.  Indiana SOE is also liable for not Vetting Obama.  Sue them also.  There law says they must be qualified by provisions of the Constitutioin.  SOE in Indiana broke the law.

Now, if Indiana breaks the laws to break the Federal Law, just how in the hell will you convice Indiana to ban Shiria law in Indiana.

Thanks, that Indian the talked about above in Cowboys and Indians.

Sharia law should have never been considered in anny US court to begin with.Manny of these FED JUDGES are

every bit as dangerous as the terrorist we face daily.Think about it.Think about their power.Not all are against us,dont get me wrong on that one.Beware and look close.