Former ACORN Director Gets $445 MILLION From US Government

I ask everyone who reads this, to not comment unless you have an idea or plan to help stop voter fraud, then please post that. There are many folks electioneering, but if we don't stop the voter fraud then no amount of electioneering is gonna matter. Please remember to only comment if you have suggestions how to stop it in your community. Lets make this a working post with helpful and productive info.

ACORN was the largest radical leftist group in America before controversy forced the discredited community organizing group to disband. This radical group worked closely with the Obama camp during the 2008 election but was not open about the relationship. The photo below was scrubbed from the ACORN website before the election: 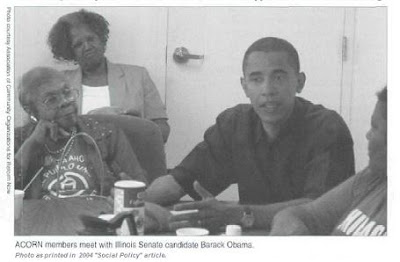 One of Barack Obama’s first big “community organizer” jobs involved ACORN in 1992. He worked along side ACORN before he became an elected official. Obama also trained ACORN employees. He represented ACORN in court. Obama worked with and protested with ACORN. His campaign donated $800,000 to ACORN in 2008 for voter registration efforts.
And, ACORN even canvassed for Obama in 2008.

In 2009 Obama promoted a top ACORN operative, Patrick Gaspard, whose organization was fined $775,000 for election violations, to a top post in the White House. Gaspard is helping shape domestic policy today.

Barack Obama was not honest about his relationship with ACORN during the 2008 election.

In 2009 Congress voted to defund ACORN and its affiliates. But that didn’t stop the Obama Administration from giving $560,000 to ACORN affiliates in 2010. Obama may not know economics. His foreign policy is a disaster. He makes a horrible leader. But, he knows community organizing.

Now this…
The Obama Administration has given a former ACORN official nearly HALF A BILLION DOLLARS after leaving the corrupt far left group.
Judicial Watch reported:

The Obama Administration has given a former director at the scandal-plagued Association of Community Organizations for Reform Now (ACORN) nearly half a billion dollars to offer “struggling” Illinois homeowners mortgage assistance, a Judicial Watch investigation has found.

It means the ACORN official (Joe McGavin) will go from operating a corrupt leftist community group that’s banned by Congress from receiving federal funding to controlling over $445 million in U.S. taxpayer funds. The money is part of a $7.6 billion Treasury Department program to help the “unemployed or substantially underemployed” make their mortgage payments.

In this case, JW found that a subcomponent of the state-run Illinois Housing Development Authority, known as the Illinois Hardest Hit Program, has just received a generous $445,603,557 Treasury infusion. The Obama Administration established Hardest Hit in 2010 to provide targeted aid to families in states hit hardest by the economic and housing market downturn, according to its website.

In early 2011 McGavin was appointed as director of Hardest Hit. Before that he was director of counseling for ACORN Housing in Chicago and operations manager for a Chicago ACORN offshoot called Affordable Housing Centers of America (AHCOA). His strong ties to ACORN make him a suspect candidate to handle such a huge amount of taxpayer dollars.

The Obama-tied community organization supposedly shut down after a series of exposés about its illegal activities.

I'm working with sources in the stinkin Occupy New England groups to identify ALL attempts to commit voter fraud and identify individuals to police sources in MA, CT, etc. This slick Soros-fed outfit is ripe for plucking as their training sessions are infiltratable this summer; do I hear any volunteers? You can crack this egg if you got some guts!

Seriously, there is only one thing I can think of to prevent people who are not eligible from voting.  That is to mandate photo ID, and as soon as that vote is cast under that name/ID #, there is a national database which ticks off that name so it cannot be used to vote again.

Voter rolls MUST be purged of multiple registrations, and verified for dead voters,

If the time and money spent fighting voter ID laws was spent assisting the supposedly poor helpless minorities who can't or won't or don't know how to obtain the documentation necessary for a state-photo ID, this wouldn't even be much of an issue.

EVERY person who has ever been invoved with that organization should be audited by the IRS.

This INCLUDES B.O. himself!

Permalink Reply by Joyce Sutherland on June 8, 2012 at 6:43pm
One week ago, on a blog talk radio show, a man named Mac Sperry was interviewed by the host. Mr Sperry has been researching voter/election fraud for ~16yrs! He actually retired early just to be able to continue this full time!! I listened to the entire show & felt like this man "is really on to something!" The problem was, for me, that the host took one phone call from a listener & it took up valuable time, as well as being ignorant. The show was ended extremely abruptly w/o Mr Sperry being allowed to give out links to his work, findings, solutions. The host did ask him to send those items to him, but as listeners, we were never given the info!!

Mac (Malcolm) Sperry had the best & easiest ways to eliminate election fraud that I have ever heard. I do not know, however, how to get in touch with him. Do any of you know this man? Perhaps listened to the show as well? I recall thinking that "We must NOT lose touch with this man!!"

Permalink Reply by Joyce Sutherland on June 8, 2012 at 6:52pm
I got an email address for him by contacting the host of the show. Here it is:
Malcolm "Malcolm Sperry"
imagineering1@gmail.com

Hope this helps. I haven't contacted him yet, but intend to.

Permalink Reply by Joyce Sutherland on June 9, 2012 at 4:13am
Twana ~ I sent him an email asking him to contact you or if he would prefer being contacted by you or by Harry. I gave him both of your names. Hope you don't mind. The thing that made the difference with his idea was that it would NOT require massive police presence at the polls, & the ballots are not sent off to another country to be counted. It's a "certification" process requiring a triplicate ballot, one of which stays with the voter. According to him, fraud has occurred in every election after the first few by the founding fathers, which were "voice votes." Also, the things he found out by researching this back to the mid eighteen hundreds was that 1) the incumbent always won & 2) the votes were so close % wise election after election. His suspicions of fraud were based on this. The counting of the ballots never actually leaves the precinct & the voter can trackback his own vote.

His plan, which he calls Vva = Voter Verified Audit (pronounced viva, like the papertowels)
Briefly, he states, that with his plan, the vote would be verified in 14hrs ~ from the times the polls open to when they close. 6am-8pm.

Everything he spoke of on the broadcast is on the website, including how to save the economy. I really like this man!! :)

Permalink Reply by Joyce Sutherland on June 10, 2012 at 7:37am
CORRECTION: The link to Mac Sperry's website is: www.howtorescueamerica.org
The word "rescue" kept changing to "restore" & I didn't notice...

I have been an election official in many elections, federal, provincial and local in Canada.  Voter fraud is a major issue anywhere but I feel for you with this upcoming election.  We require at least two pieces of photo id PLUS an envelope showing something sent to you at your home address (e.g. a phone bill).  Many newcomers, sad to say, as it is a cliche, look alike so the lists of voters must clearly be struck out as each person votes such that when another person comes to try to vote with the same name, he or she is turned away.  Cards are sent out prior to the election for those who are already registered and this facilitates the process.  Facial coverings are not permitted behind the screen - a person of the same sex who is an official may follow them behind the screen if privacy is an issue.  The training is usually very cursory and not well paid.  It would be much wiser to invest more dollars in obtaining well educated and careful individuals to staff the polls.  Give people working at the polls decent breaks to get some air and food so they do not become overtired, irritable and sloppy.  Any observers from any candidate must not interfere with the polling and absolutely NO party affiliation attire is permitted at the polling station.  No pins, no jackets, no stickers et al.  It is still imperfect but works better each time.  And, from our own recent experience, select the polling stations well in advance and have these sent not just to homes but published in the newspapers so people don't get confused and end up in the wrong place.  Better still, let's get some computer gurus to get this stuff online securely.

It is good to be a criminal and be friends with obummer.

Although facial recognition software is available, it's not cheap. But be that as it may, if teams of people were spread across the most populated voting areas of each state with digital cameras combined with lot's of storage capabilities, took the picture of every person voting at their polling location, they could then meet with other volunteers at a central location to use the facial recognition software, after the polls close, and start the process of making sure that nobody in your district voted twice. Then in the following days, these could be forwarded up the food chain to cross-reference from other districts.

When any voter scammers are found, the Police need to be brought into the process and the Media needs to be notified.

Also... have each volunteer picture-taker have a partner with them holding a large sign with an official looking badge of the DOJ on it, with the words "Voter fraud = Jail time". This way they can take turns holding the sign and taking pictures.

Not only can we catch some vote cheaters on the back-end, but some of the cheaters will be scared on the front-end to try and cheat at any other polling sites that day. Either way we win.

Absentee ballots and provisional ballots are another problem altogether.

SOME DAY.... 'WE THE PEOPLE' WILL GET SMART AND DEMAND VOTER ID's FOR ALL!