Kerry Reaches Deal To Keep U.S. Troops In Afghanistan Through 2024

Of course, shoot himself in the foot Kerry made a deal to keep troops in the land of islamic war on women, children and life in a-stan...........and of course with the same ROE or well we all know that arrogant thugs in DC (who have not served a day in their lives) will insure more dangerous ROE for our troops that will spill more of our loved ones & friends blood. And the United States Citizens who support our troops in words only (never in deed but only for show and tell) continue to be silent and pretend to support our troops while the POS criminals in DC use our troops for political pawns and care not one bit about the blood of our troops on their hands. Apparently the U.S. Citizens do not either! Most only want a seat at the table of corruption and have become addicted to the adrenaline rush of public speaking and applause.

We have some new members so I need to post this reminder.... All off topic comments will be deleted. If you want to discuss something other than topic of this post then post your own discussion. 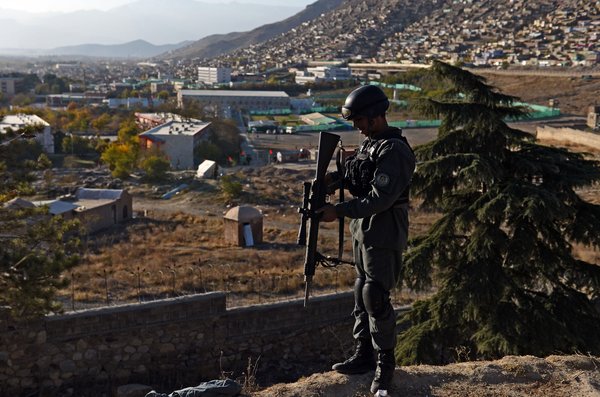 In Kabul,  an Afghan police officer stood guard near the site where thousands of elders and leadership figures are  convening this week to consider the language in a bilateral security agreement with the United States.

By THOM SHANKER and ROD NORDLAND

WASHINGTON — Secretary of State John Kerry announced on Wednesday that the United States and Afghanistan had finalized the wording of a bilateral security agreement that would allow for a lasting American troop presence through 2024 and set the stage for billions of dollars of international assistance to keep flowing to the government in Kabul.

The deal, which will now be presented for approval by an Afghan grand council of elders starting on Thursday, came after days of brinkmanship by Afghan officials and two direct calls from Mr. Kerry to President Hamid Karzai, including one on Wednesday before the announcement.

Just the day before, a senior aide to Mr. Karzai had said the Afghan leader would not approve an agreement unless President Obama sent a letter acknowledging American military mistakes during the 12-year war. But on Wednesday, Mr. Kerry emphatically insisted that a deal was reached with no American apology forthcoming.

“President Karzai didn’t ask for an apology. There was no discussion of an apology,” Mr. Kerry said. “I mean, it’s just not even on the table.”

After a war that stands as the longest in American history, the security agreement defines a training and counterterrorism mission in Afghanistan lasting at least 10 more years and involving 8,000 to 12,000 troops, mostly American.

Despite the sometimes harsh criticism from Afghan officials during the negotiations, the agreement includes concessions that the Obama administration could not win from Iraq during a similar process in 2011, leading to the final withdrawal of American troops there.

Now, the United States has at least an initial agreement from Afghan officials that American soldiers will not face Afghan prosecution in the course of their duties. And United States Special Operations forces will retain leeway to conduct antiterrorism raids on private Afghan homes — a central American demand that Afghan officials had resisted and described as the last sticking point in negotiations.

In the end, the Obama administration and the Karzai government had more reason to agree than disagree, according to officials on both sides. American officials do not want to see Afghanistan again become a haven for terrorists after it spent billions of dollars and thousands of lives in the war. And the Afghan leadership knows that more than $4 billion in annual international security assistance would simply not flow absent an American military presence to account for it.

Still, domestic political risks remain for both presidents today, as well. Some in Afghanistan already criticize Mr. Karzai as the political agent of a long-term foreign military presence. And Mr. Obama must explain to a nation weary of war why he is pressing for a continued military deployment, albeit a smaller one than advocated by American military commanders.

Further, there is an immediate risk to the deal itself: The bilateral security agreement must now be approved by the Afghan council, known as a loya jirga. About 3,000 elders and leaders, all vetted by the Karzai government, will meet in Kabul for the next three days to weigh the agreement’s language, and it is sure to face at least some criticism.

“We have agreed on the language that would be submitted to a loya jirga, but they have to pass it,” Mr. Kerry said.

Draft language of the security agreement that was posted on the Afghan Foreign Ministry website on Wednesday night differed substantially from earlier working documents made available to journalists, seeming to ease off several Afghan demands that officials had publicly described as untouchable. Still, it was unclear whether the posted draft reflected the wording that will be handed out to loya jirga delegates on Thursday morning.

On the issue of American searches of Afghan homes, the draft proposal avoids the blunt prohibition previously offered by the Afghans, which had stated: “No detention or arrest shall be carried out by the United States forces. The United States forces shall not search any homes or other real estate properties
Instead, the draft states that American counterterrorism operations will be intended to “complement and support” Afghan missions. It underscores that Afghan forces will be in the lead and that any American military operations will be carried out “with full respect for Afghan sovereignty and full regard for the safety and security of the Afghan people, including in their homes.” Even then, though, the wording does not say that American raids of Afghan homes would be conducted only to protect American soldiers’ lives — phrasing that Afghan officials had publicized on Tuesday.

The agreement itself would not establish a final troop number after the official NATO combat mission ends in December 2014. That detail is still to come from the Obama administration, and the force is expected to comprise 8,000 to 12,000 personnel to train, advise and assist Afghan forces. About two-thirds of that force would be American, and the rest from NATO and other allies.

“While we are open to keeping a residual force in Afghanistan to carry out the narrow missions of counterterrorism and training, there is no scenario in which those forces would stay in Afghanistan until anywhere near 2024,” a senior administration official said late Wednesday.

There would be no direct combat role for most of those troops, who would be assigned to major headquarters and not out in the field with Afghan units. There would be a much smaller counterterrorism force envisioned by American and NATO planners.

The current draft agreement accedes to the central American demand that ended up scuttling the Iraq negotiations: United States military personnel would be subject only to American military law and Afghanistan pledges not to turn them over to any international tribunals.

The proposed treaty does, however, grant Afghans legal jurisdiction over contractors.

The document also has a clause committing the United States to consulting with the Afghan government in the event of external threats — stopping well short of the sort of NATO-style mutual defense pact the Afghans originally wanted.

“The United States shall regard with grave concern any external aggression or threat of external aggression against the sovereignty, independence, and territorial integrity of Afghanistan,” the proposed agreement states. There is a later clause saying they would “consult urgently” in the event of such aggression.

The draft concludes, as earlier versions have, that it takes effect Jan. 1, 2015, provided internal approval procedures in both countries are satisfied — in the case of Afghanistan, ratification by the loya jirga and then by Parliament — and then “it shall remain in force until the end of 2024 and beyond“ unless terminated with two years’ advance notice.

A State Department official said that Mr. Kerry had spoken by telephone with Mr. Karzai on Wednesday morning, for the second time in two days, to nail down details of the agreement.

Another big lie from the obozo administration, who promised our troops would be home by New Year 2014. Well it looks like we have more ammunition to further disgrace obuma and his democraps, 3 strikes and your out for good.

I've got a better idea.... How about Kerry stay in Afghanistan still 2024 and bring home our troops NOW!

Hey, what does obama or kerry care, they don't have to deal with IED's at every turn and live with people that are still living like cavemen.

Are you kidding me? HELL NO do not keep them there any longer. Bring them home NOW dang it. Enough is enough. They got the A-Hole they wanted so bring them all home NOW. I agree maybe Kerry should have to go over there till, well for ever and take his buddy Obummer with him. OMG I hope Congress says NO to this deal and stop the madness right now. WOW!

My comment to Mr.Kerry is this-- why has Washington NOT addressed properly the fact that the Muslim --be they in Afghanistan --or Pakistan-- or Iraq--or Iran--or here in America  live to cradle to grave--from the womb to the tomb  being taught that they have an obligation to slay  anyone who disagrees with their sect of Islam.That seems a fair  reflection of their sacred writ. What has Not been properly address--Nor properly explained to the American people   is Why we are there--and what the H--- the goal is --what must be secured--- And what will have been gained when--if we at last- give up ruck up and leave like the Soviets did. None of it properly addressed by this or any previous American Government Office.

Another O lie - you can't believe a thing that person says.

good ole' lonesome John; never met a slimeball he didn't like... Shafting the military since the days of the Vietnam war.

by now, he must have a terrible knee problem from bowing down to kiss their butts.

One of those swift-boaters should have shoved his worthless tush overboard.

crepes like John and his counterpart Jane, need to be sent to the old hippies home...

Obama  has already purged 200 of our top generals. The purpose of this is clearly to demoralize our troops, many of whom will simply not re-up at their next opportunity. Obama cannot stand to have a well-trained military--that his own civilian army (FEMA, TSA,  HSA, BATFE, etc.) may, someday, have to fight. Why do civilian agencies need over a billion rounds of hollow point ammunition. It is against international law to use hollow points in international conflicts. Dictators can use whatever causes the most intimidation against resistance in their own population.