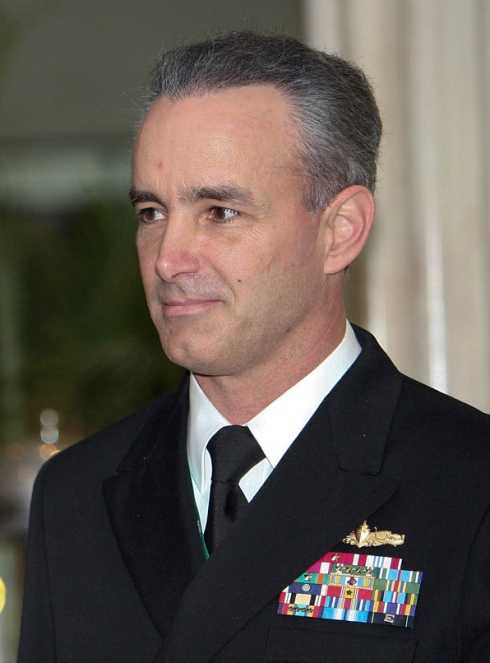 According to this report, yesterday (27 October) Obama ordered the immediate removal of Rear Admiral Charles M. Gaouette from his command of the powerful Carrier Strike Group Three (CSG-3) currently located in the Middle East.
CSG-3 is one of five US Navy carrier strike groups currently assigned to the US Pacific Fleet. US Navy carrier strike groups are employed in a variety of roles, which involve gaining and maintaining sea control and projecting power ashore, as well as projecting naval airpower ashore.
The aircraft carrier USS John C. Stennis (CVN-74) is the strike group’s current flagship, and as of 2012, other units assigned to Carrier Strike Group Three include Carrier Air Wing Nine; the guided-missile cruisers USS Mobile Bay (CG-53) and USS Antietam (CG-54); and the ships of Destroyer Squadron 21, the guided-missile destroyers USS Wayne E. Meyer (DDG-108), USS Dewey (DDG-105), USS Kidd (DDG-100), and USS Milius (DDG-69).
US news reports on Obama’s unprecedented firing of a powerful US Navy Commander during wartime state that Admiral Gaouette’s removal was for “allegations of inappropriate leadership judgment” that arose during the strike group’s deployment to the Middle East.
This GRU report, however, states that Admiral Gaouette’s firing by President Obama was due to this strike force commander disobeying orders when he ordered his forces on 11 September to “assist and provide intelligence for” American military forces ordered into action by US Army General Carter Ham, who was then the commander of the United States Africa Command (AFRICOM), against terrorist forces attacking the American Consulate in Benghazi, Libya.
General Ham had been in command of the initial 2011 US-NATO military intervention in Libya who, like Admiral Gaouette, was fired by Obama. And as we can, in part, read from US military insider accounts of this growing internal conflict between the White House and US Military leaders:
“The information I heard today was that General [Carter] Ham as head of Africom received the same e-mails the White House received requesting help/support as the attack was taking place. General Ham immediately had a rapid response unit ready and communicated to the Pentagon that he had a unit ready.
General Ham then received the order to stand down. His response was to screw it, he was going to help anyhow. Within 30 seconds to a minute after making the move to respond, his second in command apprehended General Ham and told him that he was now relieved of his command.”
Read more here: http://www.godlikeproductions.com/forum1/message2032156/pg1

We need to have Romney help US through this.

It's going to take more than just Romney. He can only do so much. It's going to take every one of us who still believes in our country and is willing to fight for what freedoms we have left. We have to regain the freedoms we've lost, also. If we don't, we've failed, anyway.

I'm beginning to think it was planned and Obama and the rest of his cabinet were in on it. It not, why were they watching it live and not helping? Why wouldn't they let anybody help? "Stand down" was the order given. Sorry, it looks like we're in for problems right here, in OUR country, unless WE THE PEOPLE do something.
God bless the ones who wanted to help and couldn't. You don't want to know what I think of the ones who wouldn't.

Frances, Go to my website http://www.joeswebmarket.com on the main page you,ll see a heading Conservative Reports/Facts,the stories are listed alphabetically click on the story Botched it will surprise you.

I believe there are two stories regarding what really happened.

Let us face it, Obama is NOT interested in protecting Americans. It appears that he is living up to his Muslim obligation to kill as many of us "Infidels" as he can, using the highest office in America to do so. America MUST "FIRE" Obama in November!

It looks like you're right. He's trying to elevate ALL Muslims, even going so far as to write an executive order giving $50 million to bring 20,000 from the Gaza Strip over here. Only to find out, 4 were known terrorists. One was found out BEFORE they got here. He said he'd stand behind the Muslims, and he is...against the very country and people he swore to defend.

At least some men of integrity still believe in doing the right thing. This should help to blow-torch any bush that Obama tries to hide behind.

Since he was elected, and before, it seems like he's got a Kevlar suit against anything thrown at him. There's a list of treasonous acts he's committed as long as my arm. OK, my leg, but that's STILL too short!

The sickening part is knowing that our mass media is helping Obama at getting away with MURDER. Yet the media will be the very first to suffer if Obama becomes a successful Marxist/Muslim.

A quote from a little known, yet very powerful Communist named Nikolai Bukharin, "We asked for freedom of the press, thought, and civil liberties in the past because we were in the opposition and needed these liberties to conquer. Now that we have conquered, there is no longer any need for such civil liberties." tells the whole story. Most in the media will be jailed or thrown out into the streets.

And those in the media think they are so damned smart. Even if you don't like Fox News, try to imagine what an Obama administration would get away with if they didn't have Fox to contend with? It's really very frightening to consider. There has to be a POWERFUL way for us to send a clear message to our mainstream media. It may take destroying their businesses by We The People. If we can clean up the Media, the politicians would have no choice but to do the right thing!!!

How a single American voter could cast a ballot for Obama the traitor in 2012 knowing what we do know is beyond me. Obama must be frustrated by our Military heroes for their refusal to be yes men when it comes to Obama's un-American policies and orders that if not actually treasonous are about as close as one can get.

I stopped counting treasonous acts by Obama LONG ago. Nobody's doing anything about it. It's time WE do it!!!