WHAT GOOD WOULD TRUMPS BORDER WALL DO, NOW THAT OBAMA BRINGS THE ENEMY IN THE FRONT DOOR...BY THE THOUSANDS?? DO NOT LET HIM DO IT...SET UP RESETTLEMENT CAMPS IN THE MIDDLE EAST (SAUDI ARABIA)

Screening outposts to be set up in Iraq, Lebanon as U.S. urges Arab nations to do more 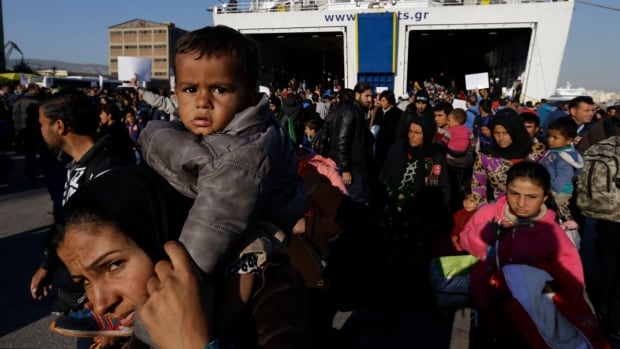 Refugees and migrants arrive from the island of Lesbos to the port of Piraeus on Friday. About 25,000 refugees and other migrants are heading to the Greek mainland from the eastern Aegean islands after the country's seamen's union called off rolling, 48-hour ferry strikes. (Thanassis Stavrakis/Associated Press)

The Obama administration is moving to increase and accelerate the number of Syrian refugees who might be admitted into the United States by opening new screening outposts in Iraq and Lebanon, administration officials told Reuters on Friday.

The move comes after President Barack Obama pledged in September to admit an additional 10,000 Syrian refugees in 2016, torn by four years of civil war and disorder.

The U.S. State Department confirmed the plans to open a refugee settlement processing centre in Erbil, Iraq, before the end of 2015, and to resume refugee processing in Lebanon in early 2016, said spokeswoman Danna Van Brandt.

The White House would not say how many additional refugees it may take in beyond the 10,000, but two senior administration officials said they are seeking ways to increase the number.

"We want to be in a place where we can push out really ambitious goals," said one of the officials, who spoke to Reuters on the condition of anonymity.

The State Department runs nine screening centres worldwide that serve as meeting points for refugees and U.S. Department of Homeland Security employees who have to decide who is suitable for resettlement in the United States.

The additional centres will double the number available to refugees in the Middle East.

Most Syrians are now screened for potential U.S. resettlement at centres in Istanbul and Amman, Jordan. The new centres are designed to "increase the channels" the United States has for reaching Syrian refugees, the official said.

Amid a tide of refugees in Europe, some congressional Democrats and refugee advocates say the United States should do more for Syrians who often make dangerous journeys to lands where they have no home or means of employment.

However, some Republicans have raised concerns that allowing more Syrians into the United States jeopardizes national security.

In another development, Anne Richard, U.S. assistant secretary of state, told C-SPAN's Newsmakers program on Friday that wealthy Gulf Arab states such as Saudi Arabia and Qatar as well as the so-called BRICs emerging market nations should do more to help Syrian refugee.

"I would like to see more aid come from the Gulf states that are in the Middle East area and are relatively wealthy compared to Jordan and Lebanon," she said.  "We would also like to see more from the so-called BRICs — Brazil, Russia, India, China and, to a lesser extent South Africa," she added. "These are the wealthy states that care about the region that could and should be doing more on the humanitarian side."

About 250,000 people have died and an estimated four million driven abroad as refugees because of the Syrian conflict, which began in 2011 with protests against Syrian President Bashar al-Assad, which has evolved into a full-blown civil war. The majority of the refugees have flowed into neighbouring nations such as Turkey, Jordan and Lebanon but hundreds of thousands have also made their way to Europe.

Why are some blaming this on Bush ?  Go back and read HISTORY ,...this has been going on since the 7th Century AD , when Mohammed told Muslims to subjugate the world to Islam . These ...ARE NOT RADICAL ...Muslims ...they are fundamental Muslims who are following the Quran and the teachings of Mohammed.  This is not the first time Europe has been invaded by Muslims ,.....ever heard of the Ottoman Turk Empire ?  I saw large stone balls on the Island of Rhodes from when the Muslims were catapulting them into the walls of the European Christian crusaders in the middle ages.  Years before the Jewish holocaust by the Nazis ,....Muslim Turks slaughtered 1.3 MILLION CHRISTIANS, mainly Armenians in the early part of the 20th Century.

Thank you Michael for bringing us back to the real issues here.  Bush never fired our Generals or neutralized our military.  Bush was not the one bringing in all the illegals to bring catastrophic havoc to our nation.  Bush was not an illegal traitor who hated America and the American people.  The only thing Bush and Obama had in common was they both liked to play golf.  However, Bush put up his golf clubs when America was threatened, and he never hid behind the skirts of racism.  BHO and all his Muslim Lieutenants need to be impeached and removed from their lofty places.   The war on Christians in America needs to come to an end and the war on Islamic Terrorist taken up in earnest.

BUSH REFUSED TO SERVE IN VN AS DID CHENEY / CLINTON.

PEOPLE WHO BELIEVE BUSH LOVES THEM ARE GROSSLY MISLED.

WHO ORDERED THE INVASION OF IRAQ ?

THAT MAY COME CALLING NEARBY.

Michael....Bush is part of the New World Order.....as his father was...as many in our Congress and Senate are. The NWO crowd is using the useful idiots and the Muslims to bring about the One World Government. These globalists/elitists....with the help of the UN..... believe they are going to be able to control the situation with the Muslims.....once it's played out. These people envision a World with no borders.....ever wonder why both of our political parties have never done anything to close our borders? Would it also surprise you to know the NWO folks want a reduction in World population? Wars and civil unrest will help achieve that reduction and put them one step closer to that utopia they crave.

Permalink Reply by Lewis Winnecour on November 13, 2015 at 10:09pm
Lewis Winnecour
We are so damn dumb the Saudis' don't want these Syrians anymore then they wanted the Palestians. They stuck Israel with the Palestians and they want to stick Europe and the USA with the Syrians and ISIS infiltrators. Obama is either the most stupid President ever or the worst enemy of this nation. Col. Riley had the right plan with Operation American Spring but when it didn't succeed I knew we were screwed. Thanks to God and our founders for the 1st, 2nd and 10th Admendments We the People my still be able to save our Republic.

I hope you are right Lewis....but....as long as Obama has control of the Military...."we, the people" are screwed. There is no way on God's green earth that even millions of patriots with rifles and shotguns can be successful  against tank and air power. Just my thoughts.

after what happened in paris today this is what we can look forward to in the future when aboma brings all the so called refuges to this country.

CALL THEM INVADING JIHADISTS - AND THEY ARE

It was all long time ago predictable. At least from time, when it was clear that Obama is Muslim himself. So everything he does makes sense. If you did read my comments, you would know it long time ago that We the People lost. I will not be surprised, if Obama will try (and could succeed) to prevent election. Remember the Congress let him to establish full blown dictatorship.  And We The People do not even read The Constitution and why the second amendment was created, I do not see anything else except complete prohibition of Islam as cult which is hiding behind religion, You either become Muslim country country under sharia, or full blown civil war. Is there any other way? You tell me. Arab countries will never takes those refugees. Massive invasion of Muslims which is going on in Europe (with the help of Turkey and Europe Union is paying for it) Saudis will help  by building 250 mosques in Germany...Maybe they will build some mosques here too. They are paying already millions to US and most likely Canada to support our education, universities and colleges. Indoctrination which is taken roots already in education system.

I understand that 10,000 approx just arrived in Los Angeles... Nothing will work when they carry forged papers... The "wall" is a beginning at least ...