Well, we are deep in the doo and it is going to get nasty....

The Alt Media Will Soon Be Gone Along with Trump and the Constitution: The Three Stages of a Revolution 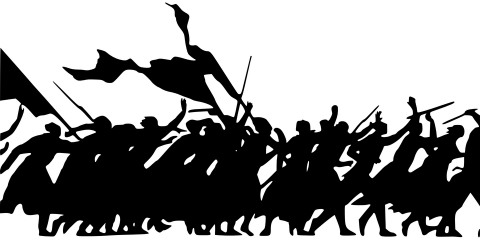 Most people in this country fail to recognize where they are at with regard to history. The majority do not see that we are already in a state of rebellion, a civil war, if you will. However, most people if they heard these words would believe that it was the average American that will be involved in a civil war, and they would be wrong!

Today, the rebellion has to do with the Deep State and their followers who rebelling against the legitimate authority, namely, the US government and its people. It is the George Soros' who are in a state of rebellion.

There are 3 stages associated with a rebellion.

Stage One of the Revolution

The first stage of a revolution, is a war of ideas and a campaign for the truth. Certainly, fake news is at the center of this. The Russian collusion delusion also fits into this paradigm. Stage one is about the control of the narrative. Where I see the enemy at the gate, most of my friends and neighbors are sleeping through the unfolding attack. We are in a war of words and if we fail to use our words to awaken all of humanity, we are hopelessly lost and the globalists will carve us up for dinner. There is indeed strength in numbers and if we are unable to wake up our fellow countrymen, we will negate the only true tactical advantage that the people enjoy, which is ideological solidarity from a numerically superior force. It should now make sense to you as to why 98% of the media is controlled by globalist controlled business interests consisting of five mega corporations, who in turn are controlled one way or another, by the members of the Federal Reserve. In order to win this fight, we need more people speaking out, making videos and calling MSM talk shows. We especially need to reach the police and the military in order to remind them of their constitutional duty to protect the people against a tyrannical government, but this is not what we are seeing. Our counter to the control of the MSM, is to exclusively support the alternative media. If the Deep State is successful in taking down the alternative media, then it will become necessary to enact a type of Committees of Correspondence apparatus similar to what our Founding Fathers did in the pre-Revolutionary War period in our history. On the ground communication is timeless, effective and very difficult for a totalitarian government to negate.

THE PEOPLE CANNOT WIN AGAINST A GLOBALIST REVOLUTION BECAUSE THE INDEPENDENT MEDIA HAS NOT CONVINCED THE MASSES AS TO THE THREAT WE ARE LIVING UNDER. AND VERY SOON, THE INDEPENDENT MEDIA WILL SOON BE EXTINCT AND TRUMP REFUSES TO DO ANYTHING ABOUT IT. THIS IS STRAIGHT OUT OF THE JOSEPH STALIN PLAYBOOK OF PREVENTING THE OPPOSITION FROM BUILDING AN OPPOSING IDEOLOGICAL BASE WHICH IS A PREREQUISITE TO ANY SUCCESSFUL REVOLUTION. IT MAY BE TOO LATE TO DO SO!

Stage Two of the Revolution

Stage two of a revolution consists of civil disobedience.  WE ARE SEEING STAGE ONE GLOBALIST TACTICS BLEED OVER INTO THIS STAGE EVEN BEFORE THE COUP TO TAKE DOWN TRUMP IS COMPLETE. This stage has to do with George Soros and paid protesters. This is about a contrived racially motivated civil war. America has gone from a Republic to a police state in less than a generation. The evidence for this transformation is as follows and it has been a long time coming:

1. The previous passage of the John Warner Defense bill removed all the firewalls between the people and subjugation by federally controlled troops. A scant few spoke out and nobody resisted.

2. Can you say FEMA Camps? The passage of the NDAA, eliminated all due process as it permitted the administration to arrest and indefinitely detain any American without due process. This is what makes the Jade Helm political “Red List” extractions legal and subsequent population relocation legal. A scant few spoke out and nobody resisted.

3. Obama’s declaration, through Executive Order 13603, proclaiming the authority to seize control over any and all assets in the country and to invoke slave labor at Obama’s whim. When the liberals reclaim the presidency in 2020, EO 13603 will prominently figure in our collective history. A scant few will speak out and nobody will resist. This is the blueprint for the total takeover of the US should the globalists ever recapture the White House and they will in 2020 as the backbone of the patriot movement, the Independent Media will soon gone, and so will Trump.

4. Red flag gun laws that can seize your gun without due process. Any totalitarian regime can cut the legs out of a revolution by disarming the people.   A scant few will speak out and nobody will resist.

No matter what gun control laws that the Deep State brings to the American people, the people need to disobey as civil disobedience is our best friend.  However, passive disobedience is our VERY best friend. Most readers already know what happens when a civilian population surrenders its guns. If your knowledge of history is shaky, take a look at Pol Pot, Rwanda, Hitler, Stalin and Mao. The University of Hawaii tells us that that over 260 million people were killed by their governments in the 20th century and this was accomplished after gun confiscation. Any nation that gives up its guns, has sealed its fate.

When, not if, but when the Deep State comes for our guns, all of us have a constitutional duty to disobey these unlawful policies. And even if we manage to hang on to our guns, it is easy to predict the next move as Stalin invoked the practice of creating food shortages. You can count on this happening.

Stage Three: All Out War

A successful revolution cannot simply jump to stage three without having progressed through the first two stages and this is the strategy of the globalists as they are dragging the people to the battlefield of their choice. When Stalin’s forces were dragging a third of the Russians out of their homes, it was too late for the Russians to fight back because the ideological base of resistance, and a sense of collective action, through civil disobedience, had not been built. THIS WAS THE STALINIST OBJECTIVE OF THE PREVIOUS JADE HELM OPERATIONS WHICH TOLD US WHAT WAS COMING BUT THE NATION DID NOT LISTEN.

The Russian people were defeated by Stalin because they did not win stage one of the revolution. We desperately need to heed this lesson from history and embark on a tireless crusade to wake up our country as to the dangers that lie ahead. And even if the people are sufficiently awakened, it does not guarantee victory of any kind unless of course, the bravado crowd has stored directed energy weapons in their basements. Therefore, it is the duty of every awake American to educate their neighbors, family and friends, whether they want to hear the truth or not. Remember, any kind resistance to tyranny will not succeed unless there is an attitude of defiance towards the tyranny. Tyrants require minions to carry out their tyranny. Education about the present tyranny can lessen the size of the potential minion pool. Again, this is accomplished in stage one and we are almost out of time. People frequently ask me if I think we can mount an effective resistance and I respond that the odds are really against the people. This fact should not keep people from resisting with every fiber of their being. Further, resistance can evolve into adaptation and this could save the lives of your family.

I hate to say it but this article is spot-on. Some of Americans woke up temporarily during the 2016 elections, just enough to elect Donald Trump. But I'm afraid most of them have now either gone back to  sleep or have bought into the kool-aid of the Communist propaganda machine. Those of us who are awake have little or no chance of getting organized enough to mount a defensive campaign against this 24/7 daily onslaught by the Communist MSM propaganda. This web site and our connected Facebook pages have been censored by Facebook to the point that we have very little outreach except for the people that come here on a regular basis.
Articles like this can be shared through email but then most people will either not read them and will not forward them to enough people to make any real difference.
The best advice I have to offer is organize organize organize, stay in touch with your own local law enforcement communities, and make sure they understand what is happening and what is really going on. Educate them if you have too, (If you CAN), but also be careful how much you reveal to them until you understand what side they will choose when SHTF actually comes.

One thing we can help do here is to try to spread the Internet connections and resources that we know about. While they are still available;

Here one like to General Paul Vallely's web site.
http://www.standupamericaus.org/sua/