Representatives Matt Gaetz, Jim Jordan, Mark Meadows, and others hold a press conference "calling for investigation on the FBI's treatment of Hillary Clinton...

This is about SPECIAL treatment the FBI gave to Hillary Clinton.

The DOJ all look the other way while Hillary Clinton gets special treatment. Instead they investigate Trump based on a Russian "dossier" which they KNOW is a lie.

In the meantime Oregon Ranchers Dwight and Steven Hamond are still in prison, the Hamond family have lost their ranch. They were forced to pay a $250,000 fine plus they were forced to sign over their ranch to the Bureau of Land Management.
The Bundy's are still on trial and facing possible life in prison, the BLM is still trying to finish the confiscation of the Bundy ranch.
And NOT one of these damned politicians, DOJ heads, or the talking heads on radio will listen or mention one damn thing about it.

Welcome to the new Amerika.

I have been praying for awhile that what is being done in the darkness is brought out into the light and I’m glad that’s it’s happening. Must say it’s on a much bigger scale than I ever imagined.

Here is the report;

Wow Old Rooster!! Wow.. it’s going to take a little time to read and digest all this, but thank you L-rd for Larry Wouten. I’ve never in my lifetime seen the light shine this bright exposing lies and corruption like we’re seeing right now. Thank you sooo much for posting. This puts the judge between a rock and a hard place as it’s plain to see she is in the governments back pocket. If she doesn’t dismiss this her bias will also be fully exposed.

Thought this posted. Evidently not so I’m reposting. Found out this morning that the head of the Montana militia has been going to our Messianic Synagouge while he awaits the outcome of the Bundy trial as he is also one of the defendants. He told another member (I have not been introduced to him as yet) that he thinks it could be dismissed this week and he and his wife can return to Montana. That what we’re continuing to pray for.

MISTRIAL!!! Old Rooster Ryan Payne is the head of the Montana Milita I was talking about. He’s the one on the far Right on the Fox News photo. The Truth has won the day. Chalk one up for the good guys.

Yes, A Mistrial, NOT a full dismissal. Judge Navarro said "there is no way the defendants can get a FAIR trial now in Las Vegas. As though what she was putting them through was anything near a FAIR TRIAL.
January 8th next date set for more hearings and Feb 28th set as preliminary date for new trials to begin.
YES - Apparently they think they are going to start all over again with new trials.
ALSO out today, A.G. Sessions has ordered a review and questioning of the FBI agents who did the SHORT investigations into Hillary Clinton and the Uranium-One deals.

Navarro failed to order the release of ALL the men on trial including Ryan Payne and the other man currently in prison up in Massachusetts.
Several of the people following this on Facebook are calling for as many people as possible to be there January 8th. I would like to go but don't have the finances.

FYI I know Ryan is under house arrest here in Las Vegas.

federal judge presiding over the trial of Nevada rancher Cliven Bundy, his sons Ryan and Ammon Bundy and their associate Ryan Payne has exposed just how lawless and corrupt our government has become – and how if you get on the wrong side of the faceless bureaucrats of the Deep State they will do whatever it takes to destroy your family and put you in prison.In the latest in a string of failed prosecutions in Nevada and Oregon against those who have opposed federal 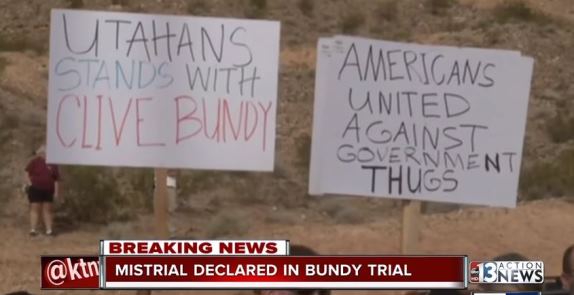 control of vast swaths of land in the American West, Chief U.S. District Judge Gloria Navarro case against the Bundys and Payne.

In the Nevada case, Judge Navarro faulted federal prosecutors for failing to turn over all evidence to defense attorneys,standoff.“The government is obligated to disclose all evidence that might be favorable”Judge Navarro methodically listed the prosecution's six separate violations of the Brady law, which requires turning over evidence potentially favorable to the defense” former Sen Majo Leader Harry Reid’s son, Rory  represents a giant Chinese energy firm, ENN Energy Group that wants to use federal land, grazed by the Cliven Bundy family,t to build a $5 billion solar farm and panel-building plant in the southern Nevada desert.

it is corrupt government officials like Harry Reid, Rory Reid, Neil Kornz, Acting U.S. Attorney Steven Myhre, and others who have lawlessly used their government power to target Cliven Bundy and his family.