Liberals create societal misfits and then, like wide-eyed parents who raise 'spoiled brats, they are stunned when their 'loser freaks' rebel 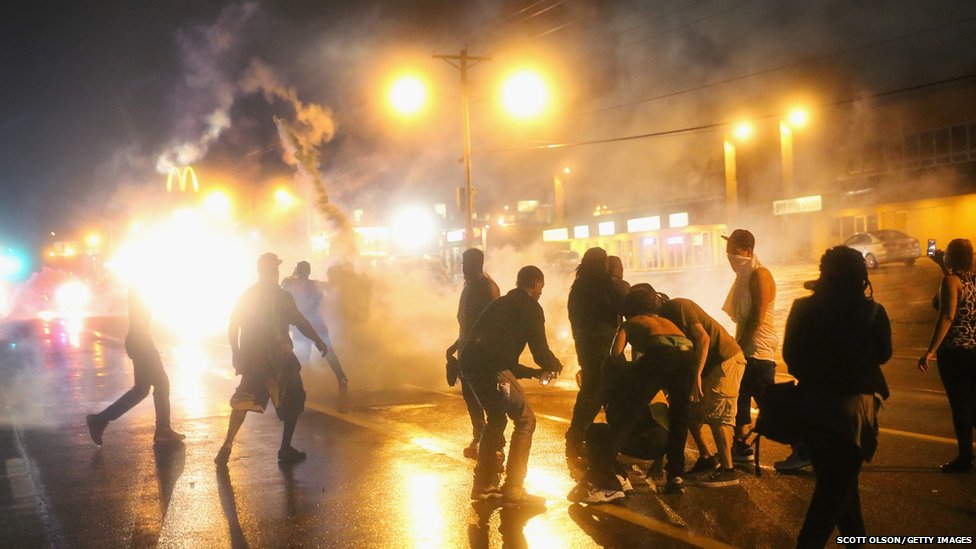 If rioting in Ferguson, Missouri had anything to do with the killing of a 'thuggish' spoiled bully, perhaps someone can explain how destroying other people's property is connected to some freakish form of 'grieving process' claimed exclusively by America's disenchanted black American communities.

Black American kids are senselessly murdered on a daily basis in places like Chicago, and yet seldom will you see equivalent violence such as that witnessed this past week in Ferguson. If any actual arrests were made for these belligerent displays of uncivilized behavior, chances are favorably high that the troublemakers are recipients of some form of government hand-out.  In a sane world, these criminals would be stripped of any such gratuitous compensations, and rightfully banned from ever qualifying for the 'fruits of another man's labor.'
THE 'MOURNING AFTER' .
Image: http://i.dailymail.co.uk/i/pix/2014/08/16/article-2726609-209327690...
Unfortunately, in this freakish world created by weak-kneed Liberals, in which we are all forced to co-exist, violent behavior is somehow interpreted as a "right" by those conditioned to receiving a regular supply of 'free stuff.'  And let not one person, lighter than a brown paper bag suggest otherwise, or risk being labeled 'a racist' by people such as Eric Holder and Barack Obama.  In the fantasy world where they live, blame  is always pinned to others, for all their brother's problems, and never accept responsibility for actions, or in-actions of what they themselves created.
The following words were skillfully written in 1997 by Lynne Namka, to describe, basically 'spoiled-brat-kids,' (my words) but see if they do not make total sense when applying them to the individuals we are watching busting up, and looting property in Ferguson.
Everywhere you see the word 'children or child' substitute with 'PARASITES RECEIVING UNDESERVED GOVERNMENT HAND-OUTS,' and it makes so much more sense when applied to the Liberals chickens coming home to roost in Ferguson.
"Children who are habitually angry typically suffer from skill deficits.

They have missed learning some of the basic skills in getting along with others.

They misinterpret social situations that are ambiguous and respond with aggressive behavior.

They have a set of beliefs that emphasize retaliation.

They may erroneously believe that self righteous expression of anger is healthy. Habitually angry children have not learned to put themselves in others' shoes and see things from other people's perspective.

They have not learned the skill of consequential thinking.

They do not know how to break into their rigid thinking and cannot stop making judgments about others.

They have strong "shoulds" for others and get upset when others do not follow their wishes.

They blame others for their problems and do not take responsibility for their own actions.

They cannot allow themselves to see that they are at fault for some of their problems.


Individuals who get upset daily over many small things have a one-response perspective on life.


Their belief is that "I want what I want when I want it and can do whatever it takes to get it!"

I have the right to get angry over every little thing. It is right for me to be angry and express it any way that I want.

They have destructive entitlement beliefs that keep them convinced that others must conform to their wishes.


They believe that the world "owes them" because they are "special."
Since the world rarely goes the way they want, they are continually disappointed and become more angry.
Their negative self talk convinces them that it is horrible when things do not happen the way that they want it to be."*

THAT IS Y WE ARE FIGHTING SO THAT WE GAIN BACK THE CONTROL NEEDED AND THE UNION PUB SCHOOL INDOCTRINATION TO THIS IS NO HELP WE AS PARENTS HAVE A JOB TO MAKE SURE OUR KIDS DO RIGHT AND TEACH THEM WHAT WRONG IS COMMUNISM AND MARXISM AND I ALL THE TIME IS WRONG.   GET THEM OFF THEIR I PHONE AND I PAD AND TALK TO THEM FACE TO FACE MAKE THEM LISTEN

Well-spoken truth, whether you want to believe it or not!

I'm surprised none of the looters were shot dead. If they were, maybe they would think twice before using a riot as excuse to rob and steal

because they should be shot dead. Any white kid's shot and he's nothing in the news. black kid gets shot and it's national attention and riots. They've already admitted that that black teen, Brown the Clown, attacked the cop to get his gun. Does that not warrant a shot to kill? In society, when you screw with a cop, you GET screwed. It's simple logic. If he didn't want to be shot, then he shouldn't have ATTACKED A COP. Yet people don't care: the riots go on, even after it was proven that he was NOT unprovoked, because black radicals will always be radicals, who believe a black matters more than a white, no differently than David Duke and the KKK believe whites to be more important than blacks. They're all EQUALLY RACIST. But america has lost touch with what defines racism, and it becomes a white-against-black issue than the MORE REALISTIC any-race-against-any-race issue.

Honestly I wouldn't care if those rioters just dropped dead so the peace could resume. Nothing but phonies causing violence and hurting others, I HAVE NO SYMPATHY.

Permalink Reply by Betsy Barnicle on August 18, 2014 at 6:39am
I dated a redneck, FL cracker 20-some years ago. He was a real cowboy. He told me how he was pulled over while driving two times by a black policewoman for NO reason other than her hatred of white, male crackers, which she would share with him verbally. She ticketed him one time for poaching, which wasn't true. (He lived on his parent's farm and could freely hunt at any time.) Discrimination isn't just a white-on-black thing. My white friend was pulled over for DWC, Driving While Cracker.

sadly the entitled class of jack-rearends our society is brewing, won't care, but you're definitely right. It's NEVER been about equality. It's about REVENGE. They think revenge is equality, when it's not. They're just as racist as the KKK, regardless of skin color and allegiance. If they have a right to not be discriminated, WHY DON'T I, AS A WHITE? Fair is fair after all, right? WRONG! They don't care, because it's NOT ABOUT EQUALITY. It's about ONE-SIDED REVENGE. They're crooks like Jessie Jackson. At least Martin Luther King spoke the words he meant. Malcom X simply believed in SOME CHANCE of half-equality, and everyone yields him as a mind of racial equality. They can't have it both ways.

I like the content,,,one must realize life as we know it will be turned upside down when the economy collapses.

Parents need to start parenting and making the young ones mind. Also, children need to be in the house after dark not out running the streets.

I never went out, either in dark OR in light. I am a hermit by nature. I am not a gang member, and have good parents. I don't do drugs and I don't steal, most significantly.

You mean like Obozo?  And "We the People" put him in there, not once, but TWICE.  WE haven't learned, either!  Or are we about to?