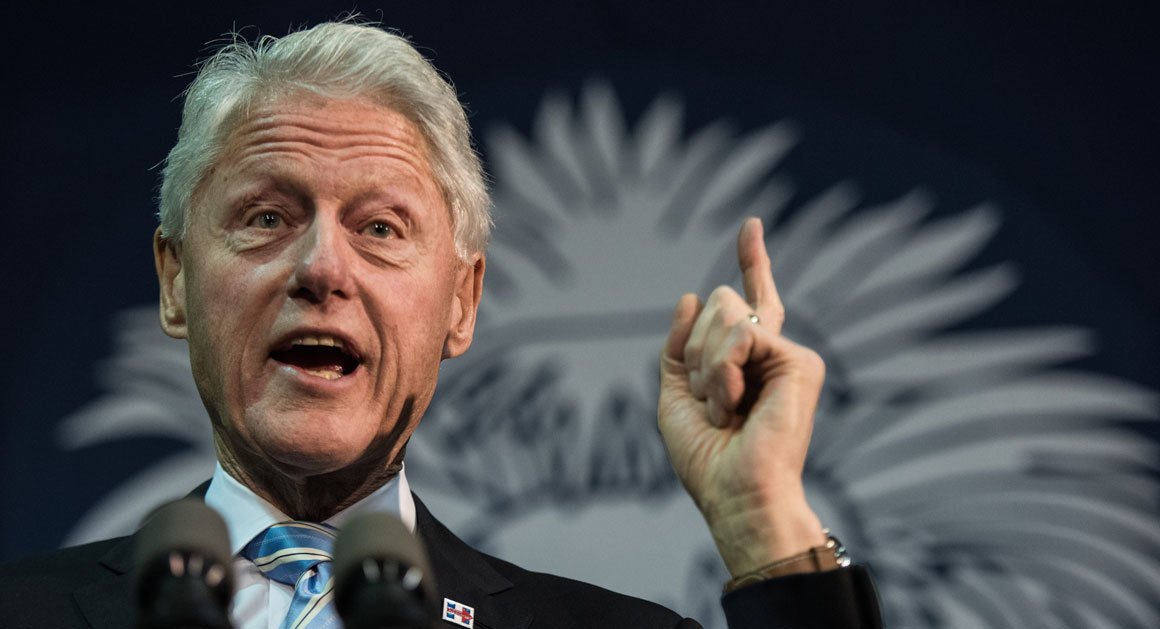 BILL SNAPS AT VET: 'SHUT UP AND LISTEN'

VIDEO: Bill Clinton snaps at veteran during speech: ‘Shut up and listen to my answer’

The long hours and grueling pace of the presidential campaign may be finally catching up with a rapidly aging Bill Clinton.

During an appearance in Bluffton, South Carolina on Friday, a former Marine interrupted Clinton’s speech and asked him to address what Hillary was going to do about the VA.

“What do you think should be done with the VA?” Clinton said in a raspy voice, turning the question back on him and yielding the floor.

“The thing is, we had four lives in Benghazi killed and your wife tried to cover it up,” the Marine responded, eliciting boos and jeers from the crowd.

As the man continued to talk, audience members yelled at him to sit down. “Are you going to let me answer?” Clinton asked. “This is America. I get to answer,” he said. “You listen to me. I heard you,” Clinton snapped as the man turned around and began addressing the crowd.

“Am I allowed to answer? I’m not your commander in chief anymore but if I were, I’d tell you to be more polite and sit down.”

“I wouldn’t listen!” the man shouted in return.

“Can I just saying something? That’s what’s wrong: his mind has been poisoned by lies and he won’t listen,” Clinton said.

A woman just jumped up and began shouting at the former president.

“Hillary lied over four coffins,” she said as a man near her yelled “Bullshit.”

“She lied and she lied to those families. So all those families are liars?” she said as Clinton tried to stop her and a Secret Service agent moved closer to the former president.

“Did she lie?” the woman said as Clinton responded, “Will you let me answer?”

“No,” he said. “Why are you afraid to listen to my answer?” Clinton said.

“Are you afraid?” he asked her. “No I’m not afraid because I know you’re going to lie,” she responded.

The video shows her then forcibly removed from the room. Clinton never did answer.

Permalink Reply by Kathie M. on February 27, 2016 at 11:42am
Of course he didn't answer...his wife Hillary actively allowed those Americans in Benghazi to be slaughtered...she emailed her daughter that she knew a terrorist attack was going on...the video had nothing to do with it and she KNEW it and BOLD FACED LIED.

Clinton is a NO NO.

Good!!! People are standing up! People are letting them know we are on to them now, They are not being treated like they are special anymore. they are being called out like the criminals they are. they have fleeced Arkansas and brought in the drugs and corruption that devastated Arkansas. They had people selling the drugs all over then when those got caught sent them to prison for loooong years when it was their drugs. They killed people and used people all over arkansas and and many other states. They should have to pay!!!

Those idiots in the crowd standing up for a person that through her emails going public prove she is a liar. That is very disappointing, they were in my hometown of Bluffton. 20 years ago there wouldn't have been enough demoncrats in bluffton for them to even bother showing up, now the demoncrats have brain washed so many young northerners who have moved there. We have to try and go out of our way to talk to young people via internet is the best way and personaly to get them to realize handouts will end up backfiring on them.

Also many of them are so agnostic they usually flock to the demoncrat party for social reasons as well. Really sad. but I think Hillary will get blown out in this election if she doesn't go to jail first.

Here's an opportunity for us all folks....this movement is being organized to find patriots just like the Marine veteran and lady that stood up South Carolina at a Clinton campaign stop and call out either Hillary, Bill or whomever is the Clinton spokesperson.

What this group is doing is finding individuals across America who are willing to visit Clinton campaign/town hall activities in their States, Counties, city/towns and call the Clinton speakers out.

We have over 8000 members of PFA, surely we can find a few hundred who are willing to stand and  hold the Clinton regime accountable.

I will have more to pass on later when the organizers give me some more detail, but for now, if you are willing, send me your name, address, phone number at hmriley@cox.net

It is a sad day in Our Country.  I don't even know what to say except that I am not (and never was) going to VOTE for "Clinton".... sk.

AMEN TO THAT SHEREE.   AMEN

Off subject except about lies.  Patriots know the Clintons lie all the time just like Obamass. So I would like to know what Obamass meant when he said that Trump would not be president. Unless things change liberal Trump will be the Republican candidate (Cruz is the real conservative). What it means to me is that the election is fixed for the liberals to win just like the last 2 presidential candidates.

Dennis....no one stood up to Obama last election...McCain/Romney had ample ammunition/data to sink Obama but moped around with a spine of jelly.........Trump is right on the Romney accusation...........Romney refused to identify the real Obama failures....just let Obama shoot him down with false statements. McCain apologized when "we the people" called him out.

I don't like many of the antics of Trump but I support him venting his spleen.......it's his dime and God knows America is weeping for someone to slam the establishment of incestuous power brokers who function only for themselves.

The folks starting on the Clinton's is a welcome activity also.......I hope and pray they can get the support across America to pin the donkey's at every campaign stop.........

Col.Riley,I have to agree with you on Trump. Even if he is elected and turns on we the people,it is no worse than what they are throwing at us now. At least we have tried to change the system and at this point it is one of the last peaceful options.

Yep Robbie..........you know what is called insanity "pursuing the same mistake over and over expecting a different outcome", that's what will happen if we continue with the same old establishment candidate (Cruz/Rubio/Kasich)...as you say, at least we have a potential with Trump to interrupt the destruction of America and move us back toward Founding principles.

Of course the media or either party does not want to touch the NBC issue as they know it will bring Obama, Cruz, Rubio crashing down............they all elevate their own self-serving goals above the U.S. Constitution.............shameful.

Did anyone catch the interview Fox did with the x president of Mexico that dropped the F bomb? He stated that McCain was one of the advisors that came to Mexico and signed a document turning that part of the US and Mexico into the North American Union. They forgot to ask the people what they thought about this deal they decided to make with Mexico and all countries below the region. He also stated the US had yet to honor that deal and was whining about it. I knew Obama had told all those people to come on over! I heard it was on their TV and newspapers and even billboards. Obama said to come on over, no border and the North American Union belongs to you too so come on over and get the freebees! I just wondered if any body else caught that?