(As you are being limited in your ability to protect yourself, the Obama government is enhancing its ability to take your life without due process ON AMERICAN SOIL.)

That story, and now others like it, are spreading quickly via the Internet – as well it should.  The ramifications of what the Obama administration is laying out against American citizens should give even the most ardent supporters of Barack Obama pause.  And yet, based on how many times this president has been allowed to be removed from any real responsibility for the actions of his administration, I am left wondering if even this story will not register with the majority of Americans. 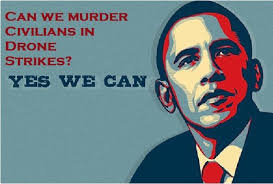 (As you are being limited in your ability to protect yourself, the Obama government is enhancing its ability to take your life without due process ON AMERICAN SOIL.)

Thousands of drone strikes have been initiated by the Obama White House via his now infamous “Kill List” where it is said, the president personally reviews the names and related information of those who wants assassinated via a drone attack.  While that scenario alone should be enough to create outrage among the Mainstream Media and Barack Obama’s liberal/progressive supporters, the actual scenario is much-much worse.  What yesterday’s story outlines is an administration that has given itself the authority to bomb American citizens both at home and abroad, based solely on a belief (and how easily would it be to manufacture such “belief”?) who are linked to a terrorist organization.  The definition of what constitutes a terrorist organization remains vague, as does the evidence linking any individual to said organization.

Again – that scenario should place fear in anyone with any understanding of traditional civil liberties in the United States.  And, the Obama drone kill program takes it even further than that – MUCH FURTHER.  Here is the line from the report that shocked even me – and I have spent considerable time and effort outlining the most frightening aspects of the Obama White House for a number of years now:

A confidential Justice Department memo concludes that the U.S. government can order the killing of American citizens if they are believed to be “senior operational leaders” of al-Qaida or “an associated force” — even if there is no intelligence indicating they are engaged in an active plot to attack the U.S.

Please read that last line again.  And again.  And again.  Barack Obama and his Eric Holder-led Department of Justice  (the same Eric Holder who oversaw thousands of illegal weapons being handed over to known criminals that were then used to murder hundreds of innocent Mexican civilians as well as American law enforcement) have outlined the authority for the Obama White House to kill an American citizen under the guise of that citizen being labeled a member of a terrorist organization – or as they put it – “an associated force”.  That citizen’s life can be taken even if our own intelligence sources indicate there is no present danger being posed against the United States.

It is, quite plainly, the means to carry out the murder of Americans with no obligation to the long-standing freedoms and liberties normally associated with citizenship.  It is the very thing the foundation of this nation was built upon when FIGHTING AGAINST such tyranny -and now Barack Obama and his administration are breaking apart that foundation and replacing it with a deadly counterpart made in his own globalist image.

Now again, I know there will be those who will shake their heads when reading such a description, and attempt to dismiss it as reactionary and the rant of someone openly critical of the policies of the Obama White House.  Fine – but before simply dismissing what is being said here now, I ask you again to go back and read that line outlining the parameters for how the Obama administration has the authority to kill an American citizen without due process – no judge, no jury:

“…even if there is no intelligence indicating they are engaged in an active plot to attack the U.S.”

I would then urge you to once again read an update from a longtime political operative who it now becomes increasingly clear just how much they knew then of the Obama administration’s obsession with drone technology.  The information given then, when held up against yesterday’s breaking news, provides yet more proof of the validity of the WHI’s information.  Frankly, I wish they were not so accurate, as the picture they paint of a man elected not once but twice to be the President of the United States, says as much about the plight of the American voter as it does about Barack Obama.