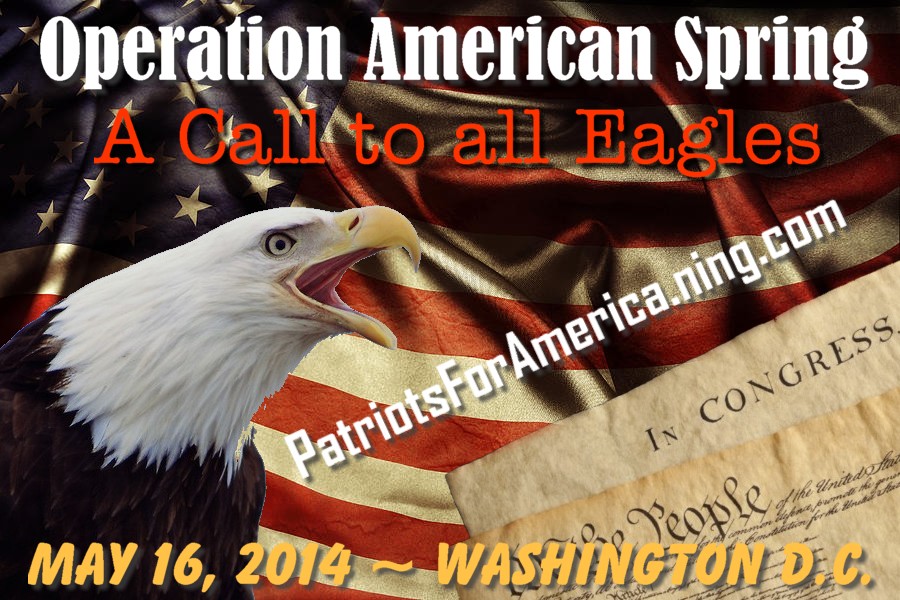 (Please add the above title and some or all data from below to your FB, Twitter, Blog, Email list)

Mission: Restoration of Constitutional government, rule of law, freedom, liberty "of the people, for the people, by the people" from despotic and tyrannical federal leadership.

Assumptions:
Millions of Americans will participate.
American veterans and patriots are energized to end the tyranny, lawlessness, and shredding of the US Constitution.

Government is not the target, it is sound; corrupt and criminal leadership must be removed.
Those in power will not hesitate to use force against unarmed patriots exercising their constitutional rights.
Patriots may be killed, wounded, incarcerated.
There is no hope given today’s technology of secrecy for the effort nor do we want it secret.

Phase 1 - Field millions, as many as ten million, patriots who will assemble in a non-violent, physically unarmed (Spiritually/Constitutionally armed), display of unswerving loyalty to the US Constitution and against the incumbent government leadership, in Washington, D.C., with the mission to bring down the existing leadership. Go full-bore, no looking back, steadfast in the mission.

Phase 2 - One million or more of the assembled 10 million must be prepared to stay in D.C. as long as it takes to see Obama, Biden, Reid, McConnell, Boehner, Pelosi, and Attorney General Holder removed from office.
Consistent with the US Constitution, as required, the U.S. Congress will take appropriate action, execute appropriate legislation, deal with vacancies, or U.S. States will appoint replacements for positions vacated consistent with established constitutional requirements.

Phase 3 – Those with the principles of a West, Cruz, Dr. Ben Carson, Lee, DeMint, Paul, Gov Walker, Sessions, Gowdy, Jordan, should comprise a tribunal and assume positions of authority to convene investigations, recommend appropriate charges against politicians and government employees to the new U.S. Attorney General appointed by the new President.

*All actions in Phase 2 & 3 will be consistent with the U.S. Constitution.

Date of Operation:  “OPERATION AMERICAN SPRING – Beginning Of Tyranny Housecleaning, May 16, 2014, completion to be determined

We are past the point of no return, thus must move forward with an effort to save our nation, as there is no other choice.  We are asking, pleading with you, and any others that have resources, national voices, email lists, blogs, FB, Twitter, to call for a non-violent American Spring May 16 2014  in Washington D.C.  We must appeal to ten million and more American patriots to come and stay in Washington, D.C. to stop the White House and Congress from total destruction of the United States.  It’s now or never. God help us.

.....the law of nature rules.  A fluffy, cuddly lamb gets eaten by a mean old wolf is not an illegal or immoral event...the law of nature.  When some greedy, self-serving occupant of the White House or Congress, or elements outside America, is threatening our existence, our freedom, our liberty, our Constitution, our life resources, our America, then we fight back to destroy the threat and there is nothing immoral or illegal about it.  When the government becomes lawless, then "we the people" no longer are obligated to follow the government......there is no law when government picks and chooses for political purposes or personal agenda.  At this time the government is performing as a lawless entity......

A duck cannot be turned into a fox; an elephant cannot be turned into a flea; the laws of nature will not permit.
Likewise, a nation ordained and principled by the laws of nature, sovereign, free, with liberty for all cannot naturally become a nation guided by royalty, decrees, tyranny, elitist, self-serving criminals.  The former has proven desirable, the latter has proven human pain.
“We can become a nation guided by royalty IF "we the people" beguiled by the government in surrender to our lusts for that which we have not earned  --for what is not natural --if we have become intoxicated by unbroken success" as Lincoln  proclaimed in March 30 ,1863  call for fasting, humiliation, and prayer--we can very easily heap to ourselves leaders, and with itching ears, be turned from the Truth to become enslaved by the LIE.”
The United States of America (elephant) while embracing the "LIE" is teetering on the abyss of becoming a sniveling, blood sucking, undesirable nation (flea).
OPERATION AMERICAN SPRING will be a gigantic step in removing the flea infestation that is sucking the blood out of America.

We see no reasonable, hopeful sign that indicates there are honorable, loyal, mature, critical thinking, experienced people in government that understands the chaos about to rain down on America, nor do they care....our only hope is that "we the people" call, organize, and draw a few million patriots to stay in D.C. for an "American Spring".  It would be the catalyst to draw the line and bring to a conclusion a decision on the out of control government, one way or the other.  America will rise up or surrender.........for me, I only go to my knees in the presence of God Almighty...........my knees will not touch the surface as a result of some piss ant occupant of the White House or a corrupt legislator, or outside element...I will fall to my death standing if necessary.

There is not much time and the only planning necessary is to select a starting date, which we have done, May 16, 2014, and then show up in Washington, D.C. on that date, and plan to stay for the duration. The goal is restoring the US Constitution as the law of the land, removing the lawless leadership.  Will this be a cake-walk?  No, it will be painful, and some people may die because the government will not be non-violent; some of us will end up in a cell, and some may be injured.  If that’s what it will take to save our nation, do we have any choice?  Freedom loving Americans will say there is no choice, we must begin the second American Revolution.  Not with guns, but with millions of Americans demanding a return to constitutional government and the resignation of Obama, Biden, Reid, McConnell, Boehner, Pelosi and Holder as a start...then the constitutional restoration process can begin.  An AMERICAN SPRING can be avoided only if the above mentioned officials resign.

Will our national patriot leaders step forward and declare, “send me”, I’ll lead?  There are millions of veterans and patriots ready to follow and have said “I will go”.

I urge all organizations, groups, particularly veterans and military retirees begin planning to visit Washington, D.C beginning May 16, 2014.   Keep tuned to Constitutional Emergency/Patriots for America www.patriotsforamerica.ning.com for updates and guidance.

Please bathe this effort in prayer as there is no personal agenda or gain save liberty, freedom, and restoration of constitutional government for "we the people".