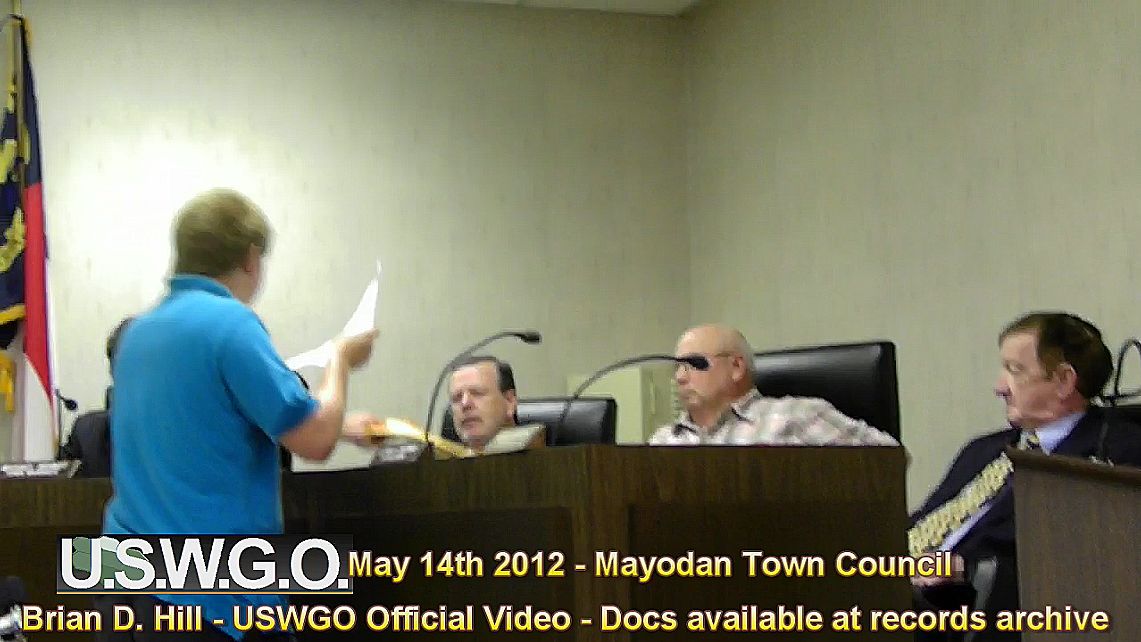 Note: To Access the progress USWGO has had at fighting the NDAA please check out our Public Records Archive.

Update May 17th: There was one reporter there that witnessed the petitioning process with me giving the petition directly to Sen. Berger. The reporter was found out to work for The Madison Messenger. No article has been found on their website as of let but after a weeks vacation the reporter is going to talk to me and likely ask me some questions and within weeks a article will likely be written.

Yesterday was a historic day in the town of Mayodan on May 14th 2012 at the James A. Collins Municipal Building. Yesterday was the day that I, Brian D. Hill, has given NC Senator Phil Berger a copy of the Nullify-NDAA Petition to get the state of North Carolina to protect it's citizens rights to a court trial and an attorney.

What exactly happened at this event was that while the cameras were rolling a two minute minute speech was made about the whole petition gathering process and then I gave the petition and my Report on the NDAA (USWGO.comPDF 0.98MB) to NC Senator Phil Berger while the cameras where rolling. The two other times Sen. Berger was just given documentation usually after the town council meeting or before but this time it was during the town council meeting so that the cameras and witnesses that attended prove that Sen. Berger received a copy of the Nullify-NDAA petition plus the Report on the NDAA for the state Government and cannot claim that he didn't get it in the event that the Feds (Federal Government) put behind-the-scenes pressure on him.

The NDAA has a nasty provision which can mean the indefinite detention of anybody including American citizens if they are simply considered hostile. The legal definition of hostility under Black's law is very vague and over-broad and can include most disgruntled American citizens. Now people can be thrown in torture dungeons overseas and may never see the light of day and may even be cooked in some furnace just like Nazi Germany. That is why this petition was created to put a stop to the cruelty and treasonous behavior the corrupt elements of our Government want to accomplish through fiat legal enforcement. Nullify-NDAA for North Carolina will get the state of North Carolina to pass a bill into law similar to HB1160 that has had great success in the Virginia state house. HB1160 is the bill that forbids the military in the state from being ordered to violate the U.S. Constitution and the Constitution of that state. The military cannot be allowed to detain Americans indefinitely without charges and a court trial according to the Bill of Rights under the U.S. Constitution. Even in State Constitutions (Modeled after the U.S.) the rights and liberties of the people are protect and codified into law.

The report on the NDAA by me (Brian D. Hill) exhibits a letter from U.S. Senator Rand Paul to the current Virginia Governor, my legal analysis on the NDAA (Was reviewed by a independent researcher, a news article on the fusion center targeting Ron Paul bumper stickers as terrorists, some pages of Project Megiddio, transcript of a leaked video of a FEMA Commander that demonized the founding fathers of the United States of America and Christians as domestic terrorists to a group of police and firefighters, a copy of the bill HB1160 that passed the Virginia House of Delegates, and Legal argument 4623 on why a court trial is necessary even for terrorism suspects. Again that document can be accessed below or you can access it on Scribd. http://uswgo.com/wp-content/uploads/2012/03/USWGO-Brian-D-Hill-Report-on-NDAA-for-state-govt_Redacted_certified.pdf Report on the National Defense Authorization Act for the North Carolina Government and for the appropriate ...

The media did not cover the event so the quality of the video may not be at it's best but despite that at least there was footage at all of this very important event. This event will mainly rely on the alternative news outlets across the Internet to make this historical event viralto persuade NC Senator Phil Berger that the only option the voters want him to take is to follow the Nullify-NDAA Petition and get a bill introduced. So despite the fact that the media was notified multiple times that a press conference was scheduled for May 14th and even the address was given to where the press conference was to be held, the media lied about all attending the press conference and making interviews about the Nullify-NDAA petition movement. The only people that filmed the event was that I personally had two cameras rolling (One on a tripod on automatic video recording, and my mother was the camera person), my grandparents also filmed the event, and I even used a netbook with a attached wind-guard microphone to capture the town council meeting and press conference. Looks like USWGO was the only media that arrived at the Mayodan Town Hall and the alternative media can also cover the story by watching the USWGO May 14th town council video and writing an article based on that.

Of course after the town council meeting I was gonna ask the Mayodan Chief of Police Charles Caruso about what he thought about the NDAA Documentation I gave him around April 9th 012 but he bolted through the back door which I discovered as I rushed over to the Mayodan Police Station right beside the towns municipal building. Me and my friend named Michael Atkins tried to get to the chief of police but when it failed we both gave up on perusing him so I can ask him that question.

Also I gave a copy of the petition to Town Manager Michael Brandt as you can see in the YouTube video at the Mayodan Town Council videos under the USWGO YouTube channel.

There was also a speech preparation document which also documents that I was suppose to give my Nullify-NDAA petition to Sen. Berger.

Emails have been sent to the offices of NC Senator and President Pro Tempore Phil Berger, Legislators Bryan Holloway and Bert Jones with access to the full 20 page grayscale petition on Nullify-NDAA, my Report on the NDAA, and given access to the YouTube video proving that Sen. Berger did indeed receive both the petition and report via special folders. Also requests have been made in them to which I am to receive emails to certify that they have indeed been received for legal formality.

If you wish to contact your own representatives and senators in North Carolina you can find out at NCLeg.net(or www.ncga.state.nc.us) or you can contact Sen. Berger, Rep. Holloway, and Rep. Jones at their contact info below and voice your support for Nullifying the NDAA in the state of North Carolina as what the 221 petition signers have declared in Nullify-NDAA by USWGO's Brian D. Hill.

Contact them quickly while the sun still shines and while we can still exercise our Freedom of Speech and Freedom of Press.

"Where to find the best resources for gardening
Places to start if you’re looking for seeds and information on when and how to get your gardens growing. This is all about learning to survive.

https://davesgarden.com/
This site has all kinds of good information including when to plant your seeds.

Texas A&M Agrilife Extension. Everything you need for growing a great garden.
https://agrilifeextension.tamu.edu/library/gardening/texas-home-veg...

" Other good places to find homestead surviving and gardening. https://www.youtube.com/results?search_query=suburban+homesteading"

"Survival techniques and ideas. Here I will start some discussions on helpful ideas and suggestions on surviving over the next few years, at least we hope so. Many people just love gardening anyway and Hollis and Nancy's Homestead is one of the best photo and video tutorial set of gardening series we have ever found. They have been making these videos for several years and cover nearly every conceivable garden vegitable we would normall expect to find at our local grocery store. There are over…"

"Let it be known know the holy spirit is poured out in abundance and this is our greatest weapon against the enemy. They don't understand why they're Coronavirus hasn't diminished all of us old dinosaurs in a way that they quite expected. They did use the mainstream fake news 2 counterman the elections and steal it. I don't know what's going to happen but I hope Trump doesn't give up the White House and if it does break out I'll be here holding the Ozark plateau"
More…
Loading ...