The Marines occupy an almost mythic place in many Americans' minds as an invincible force that runs to the guns and fights no matter what.  That's why it was so shocking to learn that, during a joint training exercise in the Mojave Desert, Britain's Royal Marines inflicted such a shellacking on the Americans that the latter had to surrender halfway through the exercise.  This is a direct result of the Pentagon having gone woke under Obama — something that Trump failed to undo — followed by Biden doubling down on Obama's policies.

But the Marines have been in war nonstop since 2001, and that's a long time for a fighting force.  At a certain point, rather than experience building them up and strengthening them, nonstop war wears men down.  They lose their edge and their fire.

The American military has had another force bearing down on it that may be an even greater enemy than Islamists the world over.  That force has been wokeism.  Beginning with Obama, the American left has been using the military as a social justice experiment.  According to James Hasson, author of Stand Down: How Social Justice Warriors Are Sabotaging America's Military, Obama purged the officer class of old-timers and brought in progressive ideologues.

Under their aegis, Navy ships went green (when they were just meant to be mean) and bore the names of well-known leftists (gay rights advocate and pederast Harvey Milk and socialist activist Cesar Chávez, who happened to hate illegal aliens).

Obama ended "don't ask, don't tell" in favor of openly homosexual military service and invited mentally ill so-called "transgender" people into the military to serve under their "identified" sexes.  That policy, more than any, affected troop fitness and deployability.

At the military academies, the focus wasn't on military history, tactics, and strategy; it was Critical Race Theory, gender theory, and anti-Americanism.  The elite Rangers were forced to lower their physical standards so that women could be admitted.

The Trump presidency provided a brief respite on transgenderism but did nothing else to undo the damage that Obama's eight years wove into the military warp and woof.  And when Biden came on board, he doubled down on wokeism, including Critical Race Theory and reinstating those transgender troops.

I don't need to remind you of Lloyd Austin's 60-day stand-down or Milley's obsession with "white rage," both of which allowed the Pentagon to purge people who aren't on board with the left's agenda.  They've further purged people through the vaccine mandate.  Add to that the disgusting and demoralizing retreat from Afghanistan, and perhaps you won't be at all surprised with the story of the Marines' loss in the "Battle of the Mohave Desert":

Royal Marines commandos 'dominated' US troops and forced them into a humiliating surrender just days into a mass training exercise in the Mojave desert, it has been revealed today.

British forces took part in a five-day mock battle at the US Marine Corps' Twentynine Palms base in southern California, one of the largest military training areas in the world, and achieved a decisive victory against their American counterparts.

The Royal Marines, along with allied forces from Canada, the Netherlands and the UAE, destroyed or rendered inoperable nearly every US asset and finished the exercise holding more than 65 per cent of the training area, after beginning with less than 20 per cent.

Combatants used paintball-style training ammunition, which fires with reduced pressure and velocity, along with hi-tech simulators for heavier firepower like artillery, and live ammo on expansive ranges.

Seeing no opportunity for victory, American combatants asked for the exercise to be 'reset' halfway through the five-day exercise, having taken significant casualties from British commandos.

That training loss transcends mere embarrassment.  The leftist obsession with wokeism to the exclusion of battle readiness is bearing fruit.  With the Chinese massively increasing their military technology (including that hypersonic missile); increasing the pressure for manly, aggressive men; and rattling the saber against Taiwan and Australia, the fact that our Marines couldn't survive a paintball battle is just devastating news for America's national security and for the free world generally. 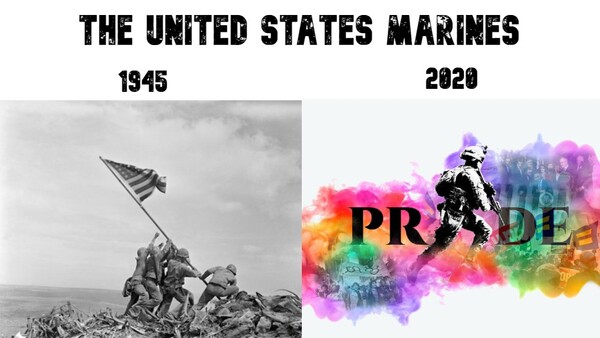