Quote from reader in Breitbart:

I think everyone is misunderstanding what Our Commander in Thief, Pedoresident Joebama Bin Hi

Every leach needs a live host

Your replacements have arrived.

In case anyone is mistaken that is what all this open-border immigration policy is all about.
Every leach needs a live host.
They wont kill the country itself, they couldn't do that if they wanted too. But they can - and

WAR - War against America, and all the free world.
And still most people still don't even know it.
In 2008 Barack Hussein Obama said "We are only five days away from fundamentally transforming America".
We all know at this point, (2022) that resident jo

Some Democrats are using the anni

RE: LETTER OF CONCERN

I am a transplant from Annapolis MD. I lived and worked in the SWAMP. (District of Corruption) my whole life. I have been in many different positions throughout my career. I watched ICLEI'S & NGO'S change t
Read more…
Started by Oldrooster
0 Replies
Views: 17

Has anyone else been sick these past two weeks?

I went in for a routine checkup with my cardiologist about two weeks ago. He said everyting was finem just wanted to run some regualr tests. So they setup an apointment for December 23rd.
We the morning of the 23rd I found myself on the phome to 911. 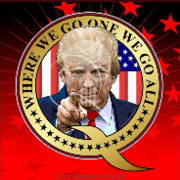 The COVID Scam: The Progressive Path to Power, and Tyranny

"Physicians who still practice medicine cannot afford to write or say the following for fear of being cancelled.  As a retired physician, I cannot be coerced to keep silent with threats to my medical license or hospital privileges.

The Great Barrington Declaration – As infectious disease epidemiologists and public health scientists we have grave concerns about the damaging physical and mental health impacts of the prevailing COVID-19 policies, and recommend an approach we call

Not 24 athletes, not 30, nor 75 - Since December, 183 professional athletes and coaches have suddenly collapsed! 108 of them died

Joe Binden says "it's about who gets to COUNT the vote"

Communist leader Joseph Stalin said the same thing during the Bolchevic revolution in 1917.
" It doesn't matter how many people vote or who they vote for, it only matters who get to count the

Folks in Kentucky need help badly.  News broadcasts say as many as 100 people may have been killed.

Read more…
Started by Oldrooster
0 Replies
Views: 13
of 979 Next