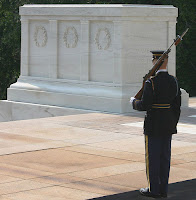 As this president will no less take credit for any positive and lay blame for all negative on his Tuesday "War" speech, Obama will more than likely bloviate on his brilliance in winning the war in Iraq. Before he does, a horrifying fact must be made. In the 20 months of this man's presidency, we have lost 632 valiant American lives in Afghanistan, the worst being the last three months, more than under the entire watchful eye of the Bush administration of over 7 years.

Have you heard that in the news?

Shameful. Is there no holding this mainstream media accountable for such debotury?

Obama has announced strategic information to our enemies, putting our brave military in more harm's way than we can imagine. And while he over-indulges himself at the Vineyard on our dime, did it ever enter his mind (or heart ..... oops, doesn't have one) that a phone call or visit to our Soldiers and their families might give them consolation? No, just shoves another ice cream cone in his face.

It's no wonder the "Miss Me Yet?" shirts are outselling all others.

I have been watching iCasualties.Org daily for the past 5 weeks. This is not a morbid curiosity; I have done this because I noticed back then that June 2010 was the worst month for US casualties of any so far in the Afghanistan war…ANY point during the 9 years we’ve been fighting it.

I noticed, upon further investigation, that the numbers were on pace to be even worse in July (which they ultimately were) and that there was not one [expletive deleted in deference to the posting guidelines] mention of this anywhere in the major media outlets. I was angry, however unsurprised I might have been, but I determined that I would quietly watch…and “listen”… to the news to see if anyone else was paying attention over these past 5 short weeks. They were not.

Over 50 Soldiers have died since I started paying attention, and the only news story I’ve seen tells of the 7 Soldiers that died last weekend. A death here or 2 or 3 there don’t, apparently, qualify as news. Meanwhile, our metrosexual President (unable to talk to the American people or the families of our fallen heroes because he’s been just too busy riding his girl’s mountain bike adorned in that goofy looking helmet which keeps him safe on his harrowing ride along the treacherous streets of Martha’s Vineyard), seems completely indifferent to these numbers.

I wouldn’t want to talk to these families either, if I were him.

In 86 months the total number of casualties in Afghanistan was 630 under the Bush command. Under Obama’s weak, waffling, hand-wringing and navel-gazing command, in just 19 months, the US casualty count as of August 30, 2010 now surpasses Bush’s numbers, sitting now at a total of 632…and counting. How can this be?

We’ve had 4,763 strategy reviews. We’ve made kissy-face with our enemies. We’ve announced to them that we have a date-certain withdrawal plan if only they could just quiet themselves and wait us out. We’ve changed leadership on the ground, modified the ROE, incorporated the Rahm Emanuel-style approach to winning friends and influencing people there, and we’ve even begun indirect negotiations with our enemy to help facilitate their return to power once we tuck tail and run.

While our former President vacationed on his ranch, running chainsaws and wearing his man pants, he took time to visit Soldiers and the loved ones of the fallen wherever time allowed. He does so still. THIS President, beclowning himself at the Vineyard on our dime playing golf, either misunderstands his role as Commander-in-Chief during hostilities or he doesn’t care. George Bush, while winning (or trying to win) wars endured daily headlines about body counts. He endured countless calls for his resignation or, failing that, his impeachment. George Bush was a lot of things to a lot of people but he always cared about the Soldiers and their families…and he SHOWED it to them on a regular basis. He cared then, and he cares to this very day. Obama clearly does not.

The question now, with Obama’s complete lack of care or concern about the Soldiers or their families or their sacrifices, is when the calls will come from the left for his own resignation or his own impeachment. I’m fairly certain, like the chirping crickets in the headlines across America, I know the answer already.

Permalink Reply by Gary Swartz on September 1, 2010 at 7:06am
If Congress grows a pair, and tries to Impeach, BO will write an Executive Order that says they can't Impeach him!

Permalink Reply by Steven G. Elliott on September 1, 2010 at 2:06pm
I think that is a real possibility. I would also bet you would like to have that OH-6 to play with today.

Permalink Reply by Gary Swartz on September 2, 2010 at 3:36pm
Anytime I want to see her, I go down to Fort Rucker, Alabama. She is in the Museum holdings.
Also, there are pictures of her on A-Troops web site.

Permalink Reply by Barbara Yeager on September 1, 2010 at 1:15pm
As long as they are in control you will never hear such a call about "the annointed one" as everyone clearly heard in campaign speeches from even the clown's wife, they plan for the "great pretender" to RULE America and want to crown him king.

Permalink Reply by Eileen DiBuono on September 1, 2010 at 4:17pm
PLEASE PLEASE go to amazon.com and get a copy of terrorist hunter by anonymous.. this is such an eye opener. you will read about the roots of Al Queda. You will read that they have all been here organizing for twenty and thirty years. We keep giving them visas and letting them teach at our universities! WTF???

Permalink Reply by Martha Donahue AZ on September 1, 2010 at 4:27pm
go on youtube and look up all their training camps here in the states.

Permalink Reply by Sandra Lee Smith on September 2, 2010 at 3:41am
Also along this line the Muslim Mafia is an excellent read; it's written by men who had an agent inside CAIR and who brought out tons of documentation of these plots against the US.