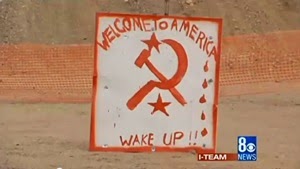 THURSDAY 24TH APRIL, 2014 AT 1 PM AN
IMPORTANT PRESS CONFERENCE IS SET
TO BE HELD AT THE BUNDY RANCH IN NEVADA
ATTORNEY LARRY KLAYMAN, WORKING CLOSELY WITH THE BUNDY FAMILY WILL ANNOUNCE TO THE WORLD WHAT FUTURE ACTION WILL BE TAKEN IN THE NOW INFAMOUS BLM STANDOFF AT THE BUNDY RANCH.

All legal options are being explored, and every legal remedy available to the Bundy Family on behalf of the We The American People are on the table. The current issues which must be dealt with through law enforcement and the judicial process are as follows:

2) Was Special Agent In Charge Daniel P. Love grossly negligent or at least negligent in a reckless way during the time leading up to, as well as during the Bundy Ranch standoff April 12th?Did Daniel P. Love inform Sheriff Gillespie that the BLM was going to “stand down”; release the land and cattle which he unconstitutionally seized under the authority of a fraudulently obtained court order? Did Daniel P. Love evade and impede a law enforcement investigation initiated by the local residents of Bunkerville, NV when they had reason to believe that the BLM was allegedly killing cattle and maliciously destroying private property owned by the Bundy Family?

3) Did Daniel P. Love personally benefit from issuing no-bid contracts to Utah cattlemen who were hired by the BLM for the specific purpose of stealing cattle from the Bundy Family?

4) Is the BLM a private corporation, or a government agency? If the BLM is a privately held organization, do they have the power of arrest, or to use deadly force with the use of AR-15’s and other lethal weapons against peaceful American citizens?

5) Can the U.S. government be restrained, or can an injunction obtained prohibiting them from taking any further action against the American people, particularly the Bundy’s, before a complete and thorough investigation is completed?

6) Can a formal legal investigation be conducted to review possible evidence and to hold Sheriff Douglas Gillespie and Daniel P. Love legally accountable, as well as, and others who may have committed crimes and violated their oaths of office? If so, can citizens make arrests once indictments have been issued and served?

7) Should Harry Reid and his son Rory be investigated and tried under the Racketeering Influenced and Corruptions Act (RICO)? Are the threats from Harry Reid and his son related to their possible attempts to profit from removing the Bundy’s from the disputed land. Does this rise to the level of Civil RICO liability?

These, and other questions will be addressed by the Bundy Family and their representatives after their private meetings with Larry Klayman and Assembly Woman Michele Fiore on Thursday April 24, 2014. Join us for the presser at the main “checkpoint” (flag poles on Riverside road, 15 freeway to exit 112; make a right and proceed approximately 8 miles just prior to the Virgin River.) Mr. Klayman, Ms. Fiore, and other dignitaries will be making some historic announcements and commentary regarding the Bundy Ranch Crisis.

Larry Elliot Klayman (born July 20, 1951) is an American attorney and activist. He is known as the founder and former Chairman of Judicial Watch, a public interest and non-profit law firm, which initiated 18 civil lawsuits against the Clinton Administration, and later a lawsuit against Vice-President Dick Cheney in order to obtain information about the White House’s energy task force.Klayman formed the organization Freedom Watch to “protect civil liberties [and] rights of all persons, whatever their ethnicity, race, religion, sex or otherwise.” He says the name originated from an NBC episode of The West Wing in which he was caricatured as Harry Klaypool.

Klayman wrote the books Fatal Neglect and Whores: Why and How I Came to Fight the Establishment, and writes a weekly column for the conservative news website WorldNetDaily.

During the Ronald Reagan administration, Klayman was a prosecutor in the Justice Department and was on the trial team that succeeded in breaking up the telephone monopoly of AT&T.

Klayman is representing families of members of Navy SEAL Team 6, the elite special forces who killed Osama bin Laden, who died after their helicopter was shot down by the Taliban three months later. Klayman contends the Obama administration put the Navy SEALs at risk by disclosing their identity.

In June 2013, Klayman sued the Obama Administration over the National Security Agency‘s collection of phone records. A federal judge agreed with Klayman that the program is likely unconstitutional, but stayed an injunction that would stop it pending an appeal by the U.S. government.

Assemblywoman Michele Fiore represents Clark County Assembly District 4 (Las Vegas) and is serving her first term. Michele was born in Brooklyn, New York, and has lived in Nevada since 1993. The only child of a single mother, Michele was taught to be fiercely independent and to value hard work.

Michele has over 24 years of business and entrepreneurial experience. She owns a company that deals with healthcare issues, providing care to the sick and elderly. Since 2003, she has created jobs for more than 1,800 Nevadans. As a CEO, she made decisions that impacted policies and procedures, and utilized a solution-focused approach to issues as they arose.

She is an ardent supporter of the Second Amendment, Michele has been interviewed on a range of subjects involving gun ownership and regulations, including school safety. She asserts that it takes a person, armed and trained, to use a gun to stop a gunman intent on doing harm to the public, and that the crime rate has gone down wherever people have been sufficiently armed to defend themselves. Her position on gun rights aligns with current Supreme Court interpretations, including the intent and purpose of the Founders’ words and writings on the subject.

Michele’s primary areas of interest are children, the elderly and animals.

The following is a message from the Bundy Family April 22, 2014

Today is a beautiful day at the Bundy Ranch here in Bunkerville, Nevada. The birds are singing, the roosters crowing, the cowboys and cowgirls are working hard to feed all the baby calves that have been left behind from their mothers being driven mercilessly by the helicopters etc.

I guess all of us here at the ranch have been deemed by Harry Reid as “Domestic Terrorists”. What exactly does that mean? According to the new Patriot Act:

Section 802 of the USA PATRIOT Act (Pub. L. No. 107-52) expanded the definition of terrorism to cover “”domestic,”” as opposed to international, terrorism.A person engages in domestic terrorism if they do an act “”dangerous to human life”” that is a violation of the criminal laws of a state or the United States, if the act appears to be intended to: (i) intimidate or coerce a civilian population; (ii) influence the policy of a government by intimidation or coercion; or (iii) to affect the conduct of a government by mass destruction, assassination or kidnapping. Additionally, the acts have to occur primarily within the territorial jurisdiction of the United States and if they do not, may be regarded as international terrorism.

Harry , I would like to ask, who had the guns pointing at whom?

Who were the civilians being intimidated?

Dave was only taking a video from his I-Pad standing by the State road side. Thrown down, beaten up and arrested by threat of Attack Dogs, Tasers, and guns.

Margaret was demanding to know why the BLM needed to use a dump truck pulling a trailer with a backhoe to gather cattle? Ammon was hollering at the man who just threw his aunt to the ground and they tased him 3 times, and sent their attack dog after him.

2 young boys were only taking pictures of helicopters pushing the cows and leaving behind the poor little calves who couldn’t keep up with their mothers when they were completely blocked up and surrounded by a dozen or so BLM vehicles. When the family, friends and neighbors ran to the rescue and hollered at them, the men threw back the boys drivers licenses at them and pulled out.

Who was being kidnapped?

Dave was arrested and taken to jail overnight bloody, dirty, and injured. Then taken to a federal court to see a judge but after a few hours of waiting to see the judge suddenly they come into the room, hand him two citations, unchain him and release him through the door into the streets of Las Vegas.

Did this occur in the U.S? Really? Is Nevada not a State of the Republic?

So Harry Reid, are you suggesting that every American who challenges Federal Governments Authority is a Domestic Terrorist?

May God Bless this Nation and all those who have the desire to stand up and take back your country using the US Constitution to restore our individual rights. Your God Given Rights. Please read the “Bill of Rights” and Pray for those who don’t even know them. Are you still paying and supporting Bill Gates?

What computer operating system are you using?
In today’s world of computers and operating systems there are several choices available and open to all users.
Apple IOS is the choice for anyone running an Iphone, Ipad, or an Apple MAC computer. That was Steve Jobs and it’s a good operating system if you can stand all the constant UN-wanted updates that could burn up your cell phone.

"In addition to arresting the full staff and owners of these fake-news networks Trump and the US Military need to arrest the top level heads of the FBI, DOJ, and several judges and prosecutors around the country.And that includes that judge sulllivan that refused to follow orders from the DOJ.We also need to suspend and revoke the FCC broadcast licenses of these Fake-News media firms. Arrest Mark Zukerberg for treason along with several thousand others.DRAIN THAT SWAMP.
"